For the latest information and guidance related to the coronavirus (COVID-19), please visit our resource page.
Skip to content

Each year, Washington’s 34 community and technical colleges, their students and their former students add $20.5 billion to the state’s economy. This economic growth translates into 321,549 jobs and about 5.1 percent of the gross state product. It all adds up to more opportunities and a stronger economy for the people of Washington state.

This was the conclusion of a 2016 economic impact study, "Analysis of the Return on Investment and Economic Impact of Education: The Economic Value of Washington’s Community and Technical Colleges," conducted by Emsi, using an economic impact model that has been field-tested in hundreds of colleges in the United States, Canada, the United Kingdom and Australia.

$20.5 billion added to Washington state's economy each year by the state's community and technical colleges

$2.80 return on investment for each dollar a student spends on a Washington state community or technical college

The study also calculated the return on investment for students, taxpayers and society. Among the findings: 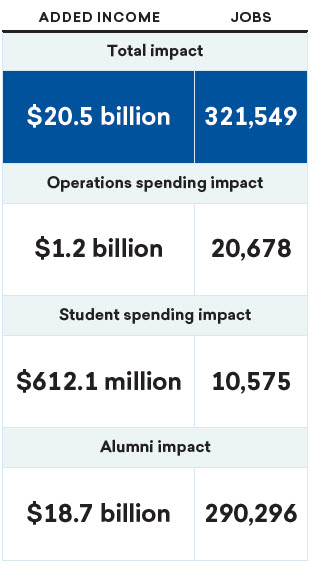